Anyway, I'll keep this short and simple and sweet and enough with the super alliteration....

To submit your build to be considered - post a screenshot(s) down below, tell me who built it, and why it was special to you.

I will literally write up a legendary story based on each build piece based on who built it and why it's special to you don't try me.

That's it, nothing else to be considered. Just be built in the survival world somewhere - built anytime. New builds, old builds, all builds are welcome.
I do request that only two submission per player - and only one winning spot per player (depending on submission count... which is typically low for things I do so who knows LOL)

Hello Friends,
Today I bring you the story of a sunflower named Fred. [sun]

The Legend of Fred the Sunflower began during the Halloween building contest of 2015, when he was created by Irish, Meow, and myself to be a pretty flower in front of a gravestone. As you can tell by the pictures below he did not end up pretty, and he didn't even really end up looking like a flower, but we love him all the same. [13]

In this first image you may notice another sunflower in the background. This is Phred. But that's a story for another time.


As you can see I tried many different angles to capture his beauty but it didn't quite work because his looks are equally as devastating no matter how you look at him.


I would like to clarify that Fred is not, in fact, a lemon. He is a sunflower. And very fabulous. Fred is very near and dear to our hearts and it would mean the world if he could be saved in the reset~

Thank you for your time.

"With a warning label this big, you know they gotta' be fun!"

I'm posting this in place of the player named Myncraft!


This first image shows the outside walls of the castle and the house in the middle. There is also a farm on one of the wings as well as two towers on the others. ***I CAN'T FORMAT THIS I'M SORRY***


This second image shows the house/farm that is located in the middle of the castle walls. This is the place Myncraft calls home. ***I CAN'T FORMAT THIS I'M SORRY***

Myncraft states that his castle means the world to him and to have it saved would be amazing. He worked hard with his friends to make a place they could all call their home. They worked together showing that they have great teamwork and cooperation skills which shows that this is even more important to them as it was done using teamwork and dedication!

around a few 4 months or something after i joined Runic, i was wondering around what id like to do, as a challenge, hopefully something Cool...
so i Found this mountain in the forest.. great view where you used to see a lot of the forest around. that's why i decided "this is my spot ,where i wanna start building". and so i started the first phase of Evalance where i created the top layer of Evalance, with 4 towers and only one stairs on the inside.. half floating above the ground but whatever. when i had the outside finished, and then figured that floating part isn't right.

So i started phase 2 of Evalance, making the Castle less floating. using dirt as a frame to be able to make thicker and thicker layers all the way to the ground. Which is how i spent most of my time being Slayer-Rank. in the meantime i had build a few houses for some friends, and another friend made a house close. so that next to Evalance there would be a village, more life around the castle. and so i finished phase 2 of Evalance and had a small village and one small restaurant around my castle.


in the hope it would stay lively around the castle.

but with the phase 1 and 2 of Evalance done, Evalance missed one more thing on the outside. a gate. i decided to make a square and some Fancy walls, two more Towers and a gate. i asked several people if they would be okay to make a gate, but ended up the space was to big so no working gate , but more like a fancy Arch. a flower pattern at the middle of the square and some beacons to make it more fun walking around.
and so Phase 3 was finished.

which took me a long time but i had the outside of Evalance finished. i havent been able to complete that many castles but this is my most proud building.

In the meantime, the village around the castle died out, villagers didn't come back. The village turned into a ghost town, leaving the castle empty.

while the even towers of Evalance were ment to be given to my Friends. but they left also leaving the castle itself empty too.

i havent been able to complete that much on the inside. i did finished the Grand throne room , where i intended to have my best friends and family back then to have a throne as a sign of gratitude and back then a wish to make everyone of them something nice and give them titles as i would look after Evalance as Lady Elizza.

i also finished a science room for brewing, some guest rooms. and was working on a mall in Evalance where i was once planning finally opening a store since i've never had one.

i had many plans for the inside of the castle. yet i havent made them. its a big building and would have needed a load off supplies for it but ended up not finishing it. but still it felt like an accomplishment. i spent a lot of time here. had some help here and there with clearing the mountain beneath.

its an old castle but i really liked it. i meant it for big plans but most i didn't do. i wanted to have a village around it but that off course went to waste. but the castle is there. the biggest castle i've ever build.
...and yes its cobble based but tried cheering it up with colorful wool.

the Castle means a lot to me since i have been busy with it a long time. it means a lot to me, cause of the people it reminds me of, a lot of building ideas that i was managed to work out. its my home. Home of Lady Elizza XD.

and the Lord of the Castle, which took her back then, a Very Long time to choose, when she got to know finally Crocodillo and choose him as Lord of Evalance

Hello! My name is Wolfgaming848. I am here to enter a building, called School. This isn't just any school, this school was built by many players who are friends. Many people worked hard on it, and was created about 1-2 years ago. Many people joined in as it was being created and soon was almost finished. But there was a few players who didn't like the school and blew a bit of it up, But luckily staff came and found out the people who blew some of it up and we had justice for the school. We fixed it and even though there is some holes in the school or unfinished parts of it, we had fun, and that's what matter. We also had some days when we went to school with other players and had the teachers on to learn and we learn real things. This is special to me because it was fun building with people and Its one of my favorite memories on the server. So I hope the School that has no proper name for it to be in the dream dome.

Hello,
Who built it: Members of the SSRA (we all contributed)
The build I am submitting today is the SSRA base. This base has been used for over a year as the Secret Service Random Acts organization on the server. The organization is anonymous. We believe that SSRA has brought some joy (or at least we hope!) throughout the server through fun drop parties, cleaning up the end, and having each member exemplify good attributes through word and deed. We will be building a new base after the reset so we look forward to seeing this build in the hub so people can see where we planned activities, stored items for dps, and many other things. Lots of hard work and materials have gone into this build, but that isn't what should matter. "The best thing in life are the memories you make" We've made a lot of memories here and would love to see others make lasting memories here as well.


Below are just some screenshots of the build.
Screenie 1: Overlook on the hangout area with a fireplace
Screenie 2: Looking up the floors of the 4 level storage room / Vault Room
Screenie 3: Kitchen Area
Screenie 4: Overlook on the library
Screenie 5: Board Meeting / Conference Room

Your consideration of this build is deeply appreciated.

I built it mostly alone with help from a few for speeding it up.

It is my precious Inn which I'd like submitted. 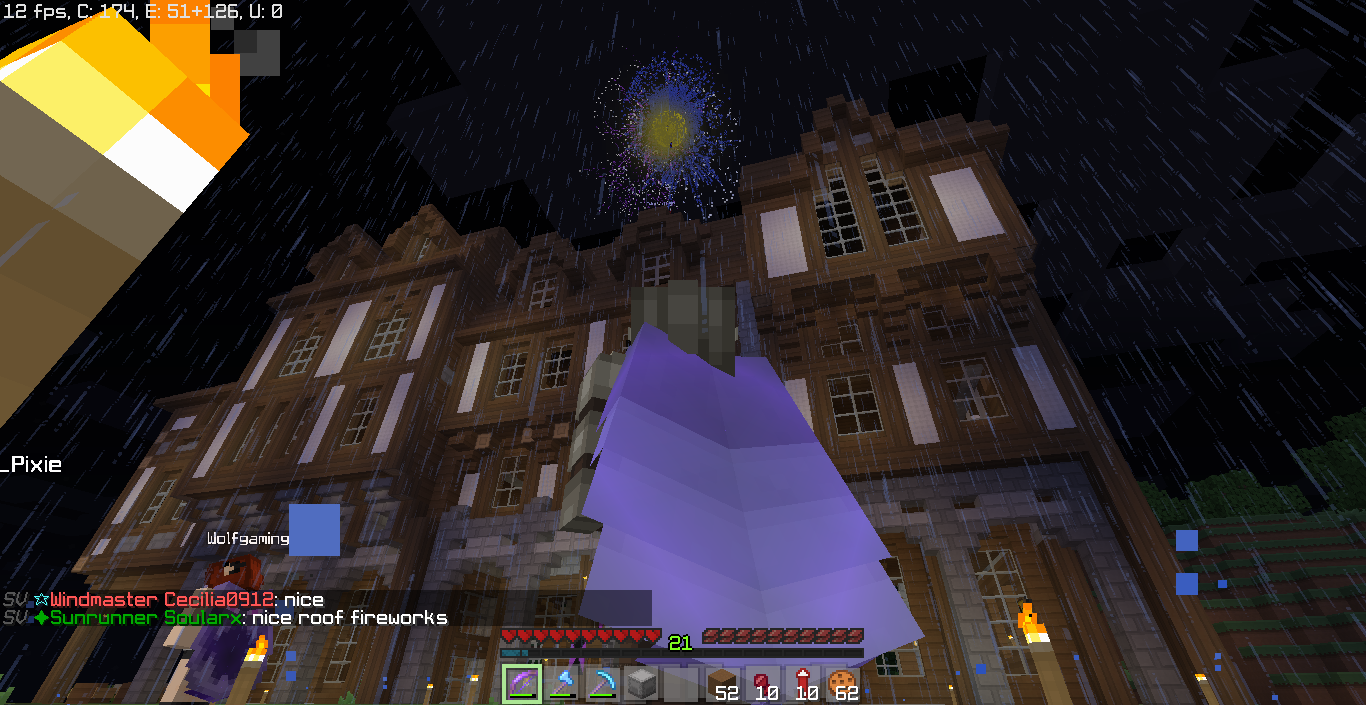 It is special to me because we hosted my runic birthday party there as seen here:

I lived there, rented out bedrooms, had my store there, and much more. A magical friendly place that welcomed all.

Thanks for your time.

Hi all - I'd like to say that everyone who has submitted builds has been accepted so far and that I've copied a part of the build for this project.

With that being said - THERE IS STILL ROOM IN THE DREAM DOME. Please submit more locations and screenshots.

Alright, my home I would like to enter for consideration is a 3 story mansion I built on top of a mountain. I would love to have it preserved simply because of all the time and effort that went into creating it, but also because a number of ladies assisted in decorating it so they would each have their own suite within. Deb and Wolfie being among them, the house has become a monument to cooperative decoration. I hope that it can be saved, and if so I would make a note that the theater located within has a lower level that the rest of the basement, to please make sure its not messed up. Pictures attached for consideration, ty. Kalendor